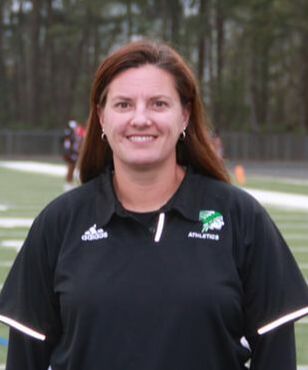 Community Coach Ginny Hughes:
Ginny (Jernigan) Hughes is in her 3rd year coaching McIntosh girl’s lacrosse team.  Under her tenure, the McIntosh Girls Lacrosse program has more than doubled in size, and is now the largest girls high school program in the state.  It's the only program to field a 9th grade team, and continues to grow each year.

Prior to joining the McIntosh lacrosse program Hughes coached at both the high school and college club levels in Michigan.  She coached 14 years for the women’s varsity high school lacrosse team, “Birmingham United” – which is a combined team from the two local public high schools, Seaholm and Groves, in Birmingham, Michigan.  During her time coaching BWLAX (Birmingham Womens Lax), Hughes help lead the program to 4 Division I State Championship Titles (‘07, ’08, ’09 and ‘12) and bookended her coaching career there with 2 State Championship Runner-Up finishes (‘03 and ‘16).  During her time with BWLAX, Ginny was instrumental in helping to guide numerous players to achieve All-American and Academic All-American awards, as well as dozens of All-State players.  Her goalie prodigy from the 2003-2008 years earned the “Ms Lacrosse” award as the top female lacrosse player for the State of Michigan, in 2008.  Ginny’s favorite statistic and is most proud of, is that every single season coaching in the BWLAX program, the team GPA was over a 3.5GPA and repeatedly won the “academic all-sports award” at the school for being the varsity sport that carried the highest GPA.  Numerous years it even was above 4.0 for the entire varsity team!
Hughes coached 5 seasons at the University of Michigan, for their women's club varsity lacrosse team in Ann Arbor, MI (2008/9-2013).  During her time at UM, the Wolverines made the national tournament 4 of the 5 years, finishing 4th in 2012.  During the 2012 season UM was ranked #1 in the country for a majority of the season and just missed the championship game via a heartbreaking overtime loss in the semi-finals, to the eventual champions, UC Davis.  Ginny served on the board for the WCLL conference, and was also the Recognition Chair for the WCLL, serving as the committee chair for the league-level awards, and the conference representative for the All-American award recognition committee.
Hughes attended Washington & Lee University in Lexington, Virginia for her undergraduate education where she was an eight-time varsity letter winner in soccer and lacrosse while also serving as captain for both teams.  The Generals’ Lacrosse team finished in the top 25 all four years of her career, and went to the NCAA National Championship her sophomore year. Academically, Hughes was an all-ODAC Conference Academic Award winner, W&L Scholar-Athlete, and was named to the W&L Dean's List and W&L Honor Roll all 4 years.  Hughes graduated Magna Cum Laude with a double major in Mathematics and Physics-Engineering.
Hughes then attended Virginia Tech, in Blacksburg, VA for graduate school where she earned a Master's degree in Mechanical Engineering with a Biomedical Option through Wake Forest University.  Her master’s research focus was on airbag-induced injuries, which was performed in the Virginia Tech Center for Injury Biomechanics. Hughes also worked on multiple impact biomechanics research projects in the areas of automobile safety, military restraints, and sports biomechanics.  Hughes played club soccer and club lacrosse in her two years at Virginia Tech (2000-'02).
Hughes graduated high school from Dr. Phillips High School in Orlando, FL, and is its most decorated female athlete of all time.  Starting every game all four years in three varsity sports, Hughes was a dominating all-around athlete who earned 12 varsity letters in Volleyball, Soccer and Softball. Graduating as the Valedictorian of her 800+ member class of 1996, Hughes exemplified the term student-athlete. She won the school's first and only Florida High School Athletic Association's (FHSAA) Statewide Scholar-Athlete of the Year award in 1996.  Hughes was named All-Metro Conference and All-District in all three sports as well as All-State in Volleyball.  She was named team captain a school-record seven times and was named both the Dr. Phillips Female Scholar-Athlete of the Year and Dr. Phillips Most Outstanding Female Athlete in 1996. She was also inducted into the Metro Conference Hall of Fame as well as the Dr. Phillips High School Hall of Fame.
Ginny is married to fellow coach Kasey Hughes and they have 2 daughters.  Haley, is 8 and Morgan is 6, and you will often see them running around at home games (and practices).  The family recently moved to Peachtree City from Birmingham, MI (a suburb of Detroit).  While in Michigan, Ginny worked as a Mechanical/Biomedical Engineer at General Motors for 8 years after graduate school until Haley was born in 2010. Her most recent job at GM was an Airbag Design Engineer where she was a project manager responsible for the design, engineering, testing and integration of airbag systems into vehicles in the General Motors fleet.